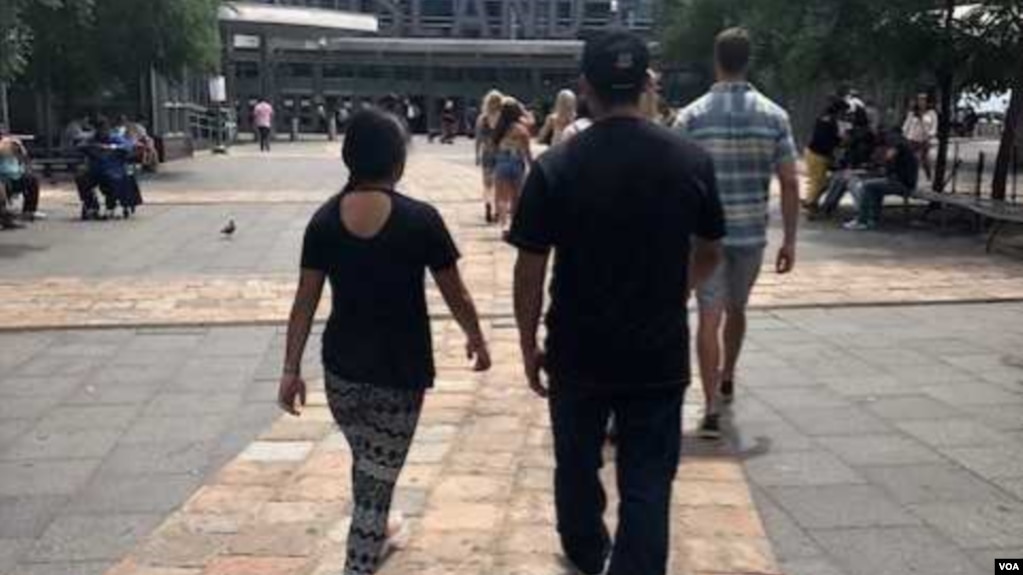 After fleeing Honduras and entering the United States legally, “Capi” and his daughter “Jamie” were separated for four months. (Photo courtesy of Christine M. Fox)

They were separated for almost four months. Although they crossed the border at a legal point of entry, Capi and his 12-year-old daughter Jamie were separated — and this was in March, a month before the Trump administration implemented its zero-tolerance policy requiring family separations.

Capi (not his real name) traveled from Honduras and entered the United States with Jamie at Hidalgo, Texas. They walked across the international bridge, presented themselves to a U.S. Customs and Border Protection (CBP) officer, and asked for help.

The father and daughter were classified as “arriving aliens” once they were presented to a CBP officer.

The pair was following the law: “If you are seeking asylum, go to a port of entry. You do not need to break the law of the United States to seek asylum,” Kirstjen Nielsen, U.S. homeland security secretary, said during a June briefing at the White House. “If an adult enters at a port of entry and claims asylum, they will not face prosecution for illegal entry. They have not committed a crime by coming to the port of entry.”

The father-daughter duo did everything by the book, yet they were separated.

Capi went to the Rio Grande Detention Center and then was transferred to Elizabeth Detention Center in New Jersey. Jamie was taken to a facility in Harlem, New York, which is operated by the Cayuga Centers — a local nonprofit under contract with the U.S. Office of Refugee Resettlement (ORR) to house unaccompanied minors. The 12-year-old was taken care of by a foster family who Jamie said at times had six children under its care.

The problem of fathers and daughters

According to a CBP official, if a male adult comes to the border with his daughter, the two are generally processed together. As long as there is no suspicion of harm to the child and there is no doubt that they are a family unit, they are not normally separated.

“They are held separate temporarily until ICE [Immigration and Customs Enforcement, the investigative arm of the Department of Homeland Security] can come … they’re either released or they go into a family residential center, and they do have family residential centers with male heads of households with daughters. They’re not as common because they don’t have as many,” the official said.

The official could not speak about Capi’s case but did say there are situations where separation has occurred based on an agent’s discretion.

“If there is a point in time that our agents feel that maybe that child [a minor girl] is not safe in an environment, then they would put that child in a female UAC [unaccompanied minor] holding area until the disposition of the family unit was made. And then they will get released or sent to ICE together,” the official said.

Fathers and children are “often” separated because most family detention facilities hold only mothers with their children, Jennifer Podkul, director of policy at Kids In Need of Defense (KIND), told VOA.

According to a report published in 2017 by KIND, some families were separated even prior to the current administration, “both intentionally and unintentionally, by the U.S. government’s immigration custody and enforcement decisions.”

“What we’re trying to show by doing that report is that DHS had no systematic way of, first of all, even identifying families traveling together,” said Podkul.

She added that members of KIND had been in contact with the U.S. government officials, telling them separations were happening, though not in “huge” numbers, and that there were ways to prevent them.

“You know, you create tracking numbers when you ask people … ‘Are you traveling with somebody?’ so you can avoid all these problems. … I mean, the recommendations were made. We drafted white papers for the government, [had] meetings with them. After they didn’t do anything, we decided to put out that report,” she said.

Journey to the U.S.

Capi told VOA he left Honduras “because of the extortion and torture they did to me. … They are forcing us to pay money that we do not owe them.”

Speaking in Spanish, he said after the journey to the U.S., the scariest moment was when immigration officials took his daughter away from him.

“They [immigration officers] didn’t know anything about her and didn’t tell me where they took her or how to get her back. When I was in detention, I kept telling them, ‘If you deport me, please deport me with my daughter.’ ”

Detainees, Capi said, were not really given information, especially those who were separated from their children.

“In detention there was a lot of confusion. A lot of people want to get out. Some get mad,” Capi told VOA. “[Inside detention], some officers speak Spanish, but they don’t want to speak with you because they say it’s not their job to [speak in Spanish.]”

While in custody, Capi had appendicitis and had to be taken to a hospital. His feet, waist, and hands were shackled.

“But it’s a lie to say that they treated me well. For small things, yes, they did. But other things, not at all,” he added.

“And because his feet were shackled, I think he fell,” explained Capi’s attorney, Christine M. Fox. “So, he doesn’t want you to think that they treated him well. That wouldn’t exactly be correct.”

Capi has been released with the help of Fox but he was apart from his daughter for four unexplained months. He has passed the credible fear interview and has a pending asylum case.

“Oftentimes” people are “in and out” of CBP facilities in 12 hours, the CBP official said, sometimes 72 hours. But not every processing center is the same, the official added.

Capi’s plan now is to overcome everything he went through on this journey with the help of his pro bono immigration attorney.

“I think that here in the United States we have an opportunity to be heard, because in our country nobody listens to us. We are not respected and we’re too scared. I just wish to have a better opportunity in life. … And more than anything, I just want to be with my children,” he said.

Capi was expecting to reunite with family members in Florida.