STATE — New Jersey lost a second police officer in what appears to be an accidental traffic collision less than week after rookie Jersey City Police Officer Melvin Santiago, 23, was shot and killed in an ambush outside a Walgreens where he and his partner responded to a 4:09 am robbery call. 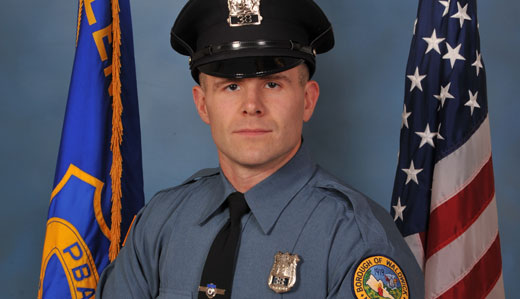 Waldwick Police Officer Chris Goodell became the second New Jersey cop killed in the line of duty within a span of one week when his patrol car was struck by a tractor trailer.

Police Officer Chris Goodell was killed Thursday, July 17, when his patrol car was struck by a tractor trailer on Route 17 shortly before 1:30 am.

Goodell was parked near Bergen Avenue on the shoulder of Route 17, operating a traffic speed radar, when the semi swerved onto to the shoulder and collided with the back of his patrol vehicle.

The unmarked police car was then pushed into a retaining wall. Goodell was pronounced dead at the scene.

The truck driver, 28-year-old Ryon Cumberbatch, of Brooklyn, has been charged with second-degree vehicular homicide in Goodell’s death. Cumberbatch was not injured and called 911.

An off-duty deputy from out of state was the first to arrive at the collision and immediately began providing aid to the fatally injured officer, who served with the Waldwick Police Department for five years and was a Marine Corps veteran.

“He was an outstanding and proactive officer who loved his family, his fiancee, his job and his comrades,” said Waldwick Police Chief Mark Messner. “He will be sorely missed.”